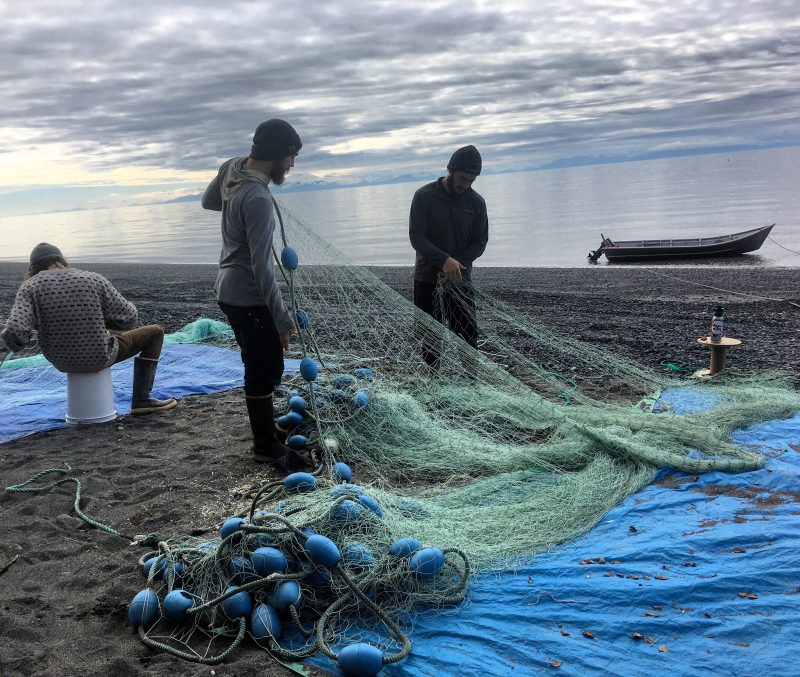 If the upcoming mid-term elections this November were not polarising enough for communities across the United States, in Alaska, a ballot measure intended to update the state’s permitting laws for anadromous fish habitats is increasingly dividing the US’s only Arctic state.

If passed, Ballot Measure 1 (BM1) would update Alaska Statute Title 16, which covers permitting procedures for protecting habitats that are important to anadromous fish lifecycles.[1] Stand for Salmon, the group in support of the measure, claims that Alaska’s fish permitting laws, specifically Statute 16, are outdated and ineffective for protecting salmon habitats from mega-projects that were perhaps unforeseen 60 years ago, such as Pebble Mine.

In amending section 16.05.871, the Act assumes all waters and streams connected to known anadromous waters or marine waters are anadromous habitats until proven otherwise. It also establishes a tiered permitting process, with more scrutiny applied to projects with a greater potential to harm anadromous fish habitats.

As with much of the election season, confusion and upheaval has plagued the ballot initiative since the beginning. In 2017, the Office of the Lieutenant Governor ruled that the initiative’s language unconstitutionally appropriated state assets by requiring the legislature to privilege one natural resource over others without discretion. Stand for Salmon challenged this in front of the Alaska Supreme Court in Stand for Salmon v. Mallott (2017). In the end, the Court allowed the initiative to appear on the November ballot, but with revisions to the language to allow for more legislative discretion in accordance with the Alaska Constitution.

The eight-page-long initiative is certainly complex. And the controversy over the ballot measure, perhaps, even moreso. 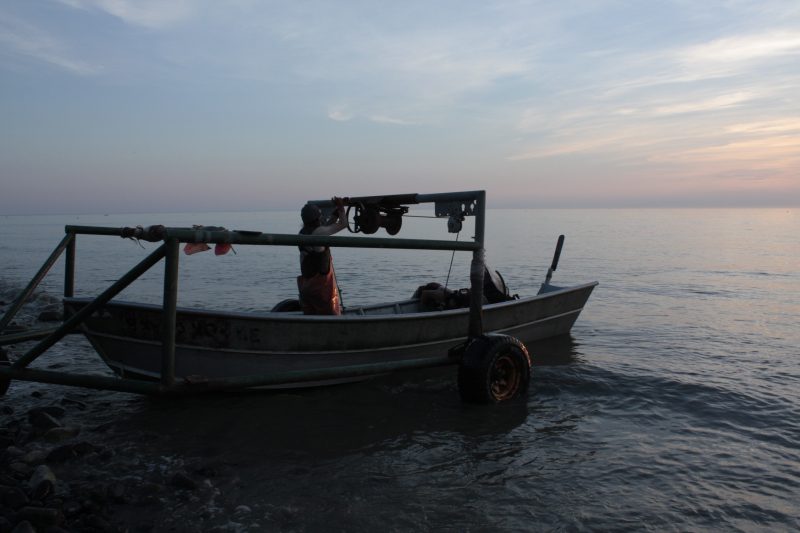 In the summer, you always know you’re on a flight into Alaska because everyone around you seems to be talking about fish. Tourism depends on the streams and rivers of wild salmon, with sportfishing drawing visitors from all over the world each year. Meanwhile, just before commercial fishing season starts, workers from across Alaska and the world flock to the sea in perennial migration to harvest, process, package and ship Alaskan salmon.

Globally, Alaska produces about 2% of the world’s wild harvest and aquaculture produced seafood, and produces more wild seafood than all other US states combined. The commercial fishing industry makes up about 20% of Alaska’s basic private sector economy, with an economic output of $5.6 billion USD, and employs nearly 56,800 people (based on 2015-2016 data).  Salmon alone contributes approximately 32,900 full time jobs and $1.7 billion in annual labour income to the national economy.

To say that salmon are intertwined with Alaskan identity would be a gross understatement. Each year, residents across the state harvest their own salmon from waterways like the Kenai and Copper Rivers, filling freezers with enough fish to feed their families through the winter. Even in downtown Anchorage, Alaska’s largest city, people can be seen fishing for sockeye salmon on their lunch breaks.

While access to salmon plays an important role in food sovereignty throughout Alaska, it is especially important in many rural areas, where relying on food shipped in from the outside would be economically impossible. And for Alaska Native communities especially, salmon are a subsistence right and integral part of cultural heritage.  Across the state, Alaska’s Indigenous peoples have relied on and managed sustainable salmon fisheries for millennia. 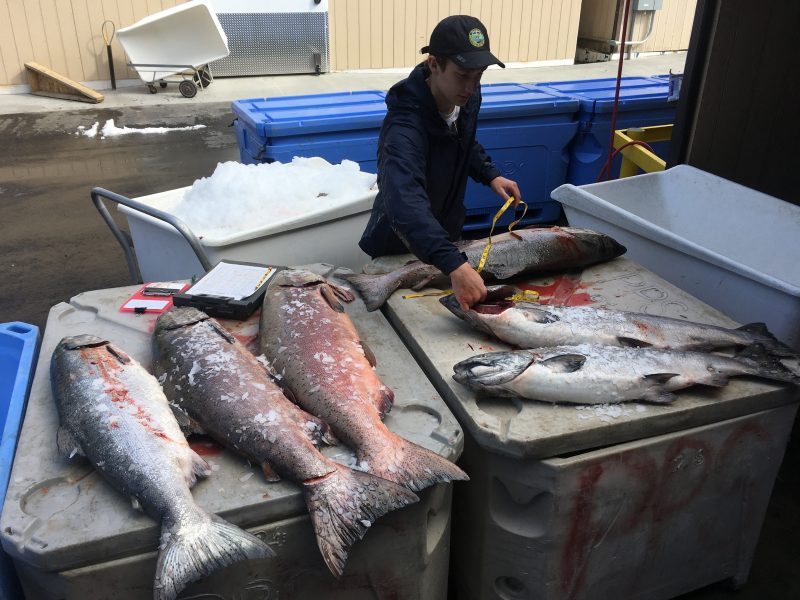 Connection to Pebble Mine

For these reasons, when Pebble Limited Partnership (owned by Canadian mining company Northern Dynasty Minerals) proposed to develop an open-pit mine called the Pebble Mine Project, dangerously close to the headwaters of Bristol Bay, Alaskans came out in droves to oppose it.

And yet, most Alaskans are not opposed to mining. Opposition to Pebble Mine did not seek to put an end to extractive industry in Alaska. Rather, their slogan, “Wrong place, wrong mine” indicated there was a “right place, right mine”, one which balanced the development of Alaska’s mining industries with the safeguarding of its other important natural resource, salmon.

Nevertheless, the current ballot measure is certainly an offspring of the decades-long battle to protect Bristol Bay from Pebble Mine, a saga that has been a rollercoaster of precarious successes and near-failures. After the election of President Donald Trump, the fate of these headwaters was once again thrown into jeopardy. In many ways, BM1 was born from attempts to achieve a statewide and permanent safeguard against the threat of Pebble Mine in a volatile political climate.

Defeat on November 6th could mean sending a dangerous signal of acquiescence to actors like Pebble Ltd. Partnership, reinvigorating their efforts to develop Pebble Mine. Passage could safeguard fragile and vital ecosystems against similar threats in the future.

But passage could also mean jeopardising Alaska Native rights to economic self-determination and paralysing the development of roads and infrastructure vital to delivering healthcare to some communities, for example.

Stand for Salmon vs. Stand for Alaska

The top three contributors to Stand for Salmon, the proponents of BM1, are the Alaska Conservation Foundation, The Alaska Center and Cook Inletkeeper all of which are environmentally-oriented non-profit organisations. To varying degrees, all three organisations advocate for a transition away from extractive industries. Stand for Salmon, the campaign in support of BM1 calls it “an opportunity for our state to balance salmon habitat protection with responsible development.”

But, this is not a simple task. Though revenue from oil is in decline, extractive industries still accounted for 15% of Alaska’s GDP in 2016. Alaska also produces 14% of US gold and ranks as the 3rd and 4th biggest natural gas and crude oil-producing states in the US respectively. Meanwhile, Alaska is not merely dependent on extractive industries. Oil, gas and mining are in many ways embedded in the narrative of Alaskan identity. Over a century of boom-and-bust economies, attracting settlers from around the world, solidified a mentality of get-rich-quick resource extraction.

So it comes as little surprise that the top three contributors to Stand for Alaska, the No on BM1 campaign are ConocoPhillips Alaska, Donlin Gold LLC and British Petroleum (BP) Alaska.

But opposition is diverse, with many who are staunchly opposed to Pebble Mine surprisingly wary, if not outright against BM1. Even Bristol Bay Native Corporation, one of the biggest stakeholders in the battle against Pebble Mine, opposed the measure at first, though it has since shifted its position to neutral.

Part of the problem is that many do not think natural resource management should be decided by a ballot measure in the first place. Pacific Seafood Processors Association and the United Fishermen of Alaska both remain officially neutral on the initiative, despite wanting to see the Alaska Legislature update fish habitat protection laws.

Employing the narrative of people from “Outside” Alaska meddling in local affairs is a strategy known to trigger Alaskan voters, who tend to have a remarkably independent streak on both sides of the aisle. Stand for Alaska claims BM1 is “funded by Outside money”, while Stand for Salmon claims “the foreign mining corporations opposed to this initiative will say and do anything to maximise their shareholders’ profit.”

But despite both campaigns’ efforts to garner credibility through proximity, Alaska Native organisations, as representatives of Alaska’s truest ‘Insiders’ and the stewards of Alaska’s lands for millennia, are to be found on both sides of the debate. Bristol Bay Native Association, Tanana Chiefs Conference and United Tribes of Bristol Bay are the most visible Indigenous supporters of the ballot measure, along with many other smaller tribal organisations. Meanwhile, NANA Regional Corporation, CIRI, Calista Corporation, North Slope Borough, Northwest Arctic Borough Assembly, Tyonek Native Corporation and Sealaska Corporation are amongst a long list of those who oppose it.

Many Alaska Native corporations opposed to BM1 are justifiably concerned about the lack of consultation in drafting the proposal and the impact it might have on their economic self-determination. Opponents argue that BM1 creates red tape that could threaten other much-needed development, such as renewable energy projects like wind and hydropower, road construction and infrastructure. As climate change increasingly threatens communities in the Arctic, energy independence and infrastructure are becoming important concerns for ensuring resilience. And time is of the essence.

Regulation in a Changing North

Indeed, the need to act swiftly in response to changing climatic conditions in the North is fuelling anxiety on both sides of the BM1 debate. Though the Bristol Bay fishery has experienced record numbers of returns the past two years, in other parts of Alaska returns of salmon are concerningly low. Theories abound over the cause of declining fish stocks, from a patch of warm water in the Pacific Ocean called “the blob”,  to northern migration of fish stocks escaping warming oceans, to the adverse effects of glacial retreat on salmon habitats.

As the Bering Sea and Arctic Ocean open up for increased ship passage and resource development due to climate change, offshore habitats where salmon and other fish spend a great deal of their lifecycles also face increased threats like greywater being dumped overboard from cruise ships and Heavy Fuel Oil spills from increased traffic.

In this way, salmon seem most threatened by the snowballing impacts of climate change that are more usefully addressed at a global level. Whether or not BM1 will help to alleviate the most dire threats to Alaska’s fish is unclear. Nevertheless, Stand for Salmon and their supporters believe creating an extra layer of protection for the areas where wild salmon spawn is an achievable and crucial precaution amidst all of the other variables at play. 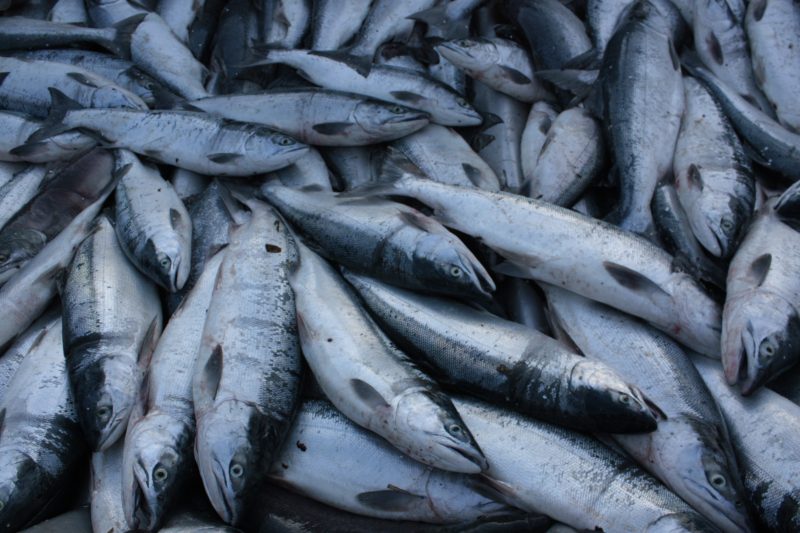 What will Alaskans ‘Stand’ for?

At first glance, Ballot Measure 1 may appear as just another battle between naïve environmentalists and greedy developers; the fishing industry and oil companies; Indigenous peoples and foreign corporations; or even between Democrats and Republicans. But all of these contradictory narratives misrepresent the nuanced relationships at play.

Alaskans will like to tell you that they are different. A sense of exceptionalism runs deep. But, in many ways, Alaskan politics ARE unique and often defy assumptions. It may be difficult to imagine how, in a conservative, oil-producing state such as Alaska, an initiative reigning in resource development and increasing government oversight of the environment would ever pass. But if any cause stood a real chance at garnering the support necessary, it is absolutely Alaska’s salmon. 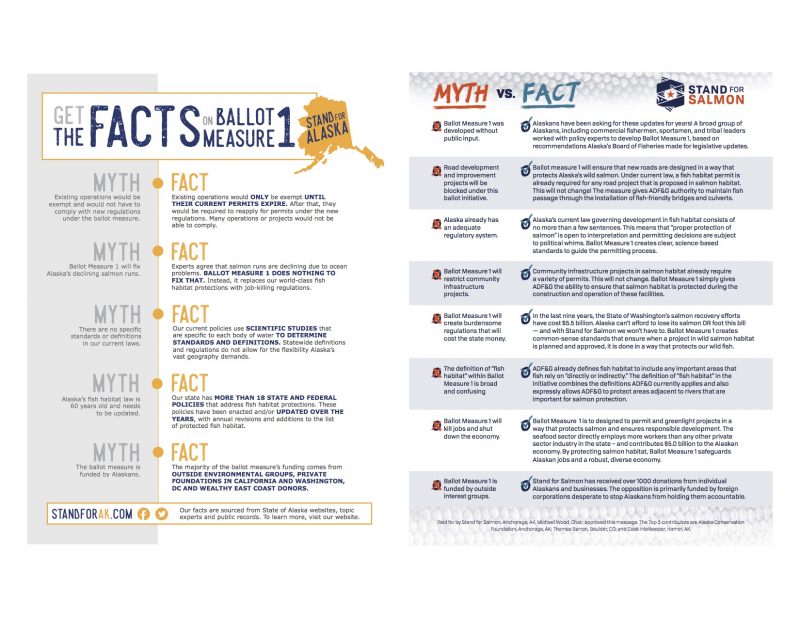 Erin Willahan is a Fellow at Polar Research and Policy Initiative, where she focuses on connecting the intricate social, cultural and economic realities of communities in Alaska to wider local-global dialogues across the Polar Regions. Born and raised in Alaska, Erin has worked in a range of fields related to Arctic issues. These include facilitating an ongoing project with the Alaska Division of Elections to translate official election materials into Alaska Native languages, research on cultural commodification in tourism, and working as a commercial fisherwoman. She is currently undertaking her M.A. in the Erasmus Mundus Human Rights Policy and Practice program. Her research interests revolve around decolonising Arctic discourse through Indigenous-led resource management policy, environmental justice in the face of climate change, and the ways in which sites of historical injustice are negotiated in North American Arctic communities.

Note: Polar Research and Policy Initiative (PRPI) remains independent on the question and welcomes comment provided by parties across the spectrum of support or opposition for the ballot measure. Please send draft pieces to Dr Dwayne Menezes at [email protected]