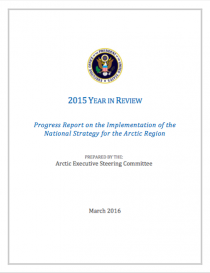 On 9 March 2016, the White House-led Arctic Executive Steering Committee (AESC) released the 2015 Year in Review—Progress Report on the Implementation of the National Strategy for the Arctic Region (Year in Review). The Year in Review reports on Federal interagency coordination to carry out the lines of effort set forth in the National Strategy for the Arctic Region. Importantly, much of this coordination included those stakeholders on the front line of changing conditions in the Arctic: the State of Alaska and Alaska Native communities. The Year in Review also highlights the tremendous progress that has been made to advance the Strategy through new and supporting initiatives, including the more than 35 commitments made by President Obama during his 2015 historic trip to the Arctic; efforts related to the the Interagency Arctic Research Policy Committee’s Arctic Research Plan; and other emerging priorities identified by the AESC.

In addition, the White House released the 2016 Implementation Framework for the National Strategy for the Arctic Region (Framework) as an appendix to that report. This forward-looking, strategic-planning document updates the 2015 Implementation Plan and incorporates new initiatives, emphasizes community sustainability and resilience, and increases the importance of science and research by incorporating by reference the entire Interagency Arctic Research Policy Committee’s Arctic Research Plan.

The Obama Administration made it a priority to align and focus Federal efforts in the Arctic region. In 2013, the Administration published the National Strategy for the Arctic Region (Strategy). The Strategy prioritizes national effort and builds upon existing initiatives by federal, state, local, and tribal authorities, the private sector and international partners. In 2014, the Administration published the associated Implementation Plan (Implementation Plan) for the Strategy. In January 2015, President Obama signed Executive Order (E.O.) 13689, Enhancing Coordination of National Efforts in the Arctic, which created a new Arctic Executive Steering Committee (AESC) responsible for fostering communication, coordination, and collaboration among the 25 Federal departments, agencies, and offices with responsibilities in the Arctic region. Dr. John Holdren, Assistant to the President for Science and Technology, serves as Chairman of the AESC. The Vice Chair is Deputy Homeland Security Advisor Amy Pope, and Ambassador Mark Brzezinski, recent U.S. Ambassador to Sweden, is the Executive Director.

During its first year, AESC activity focused on supporting the United States’ two-year rotating chairmanship of the Arctic Council; developing the 2015 Conference on Global Leadership in the Arctic: Cooperation, Innovation, Engagement and Resilience (GLACIER); addressing coastal erosion and oil-spill prevention and preparedness; and establishing a $4 million Remote Alaskan Communities Energy Efficiency Competition. In addition, the AESC worked with Federal agencies to continue to prioritize Arctic initiatives aligned with the three lines of effort detailed in the Strategy and the Implementation Plan.